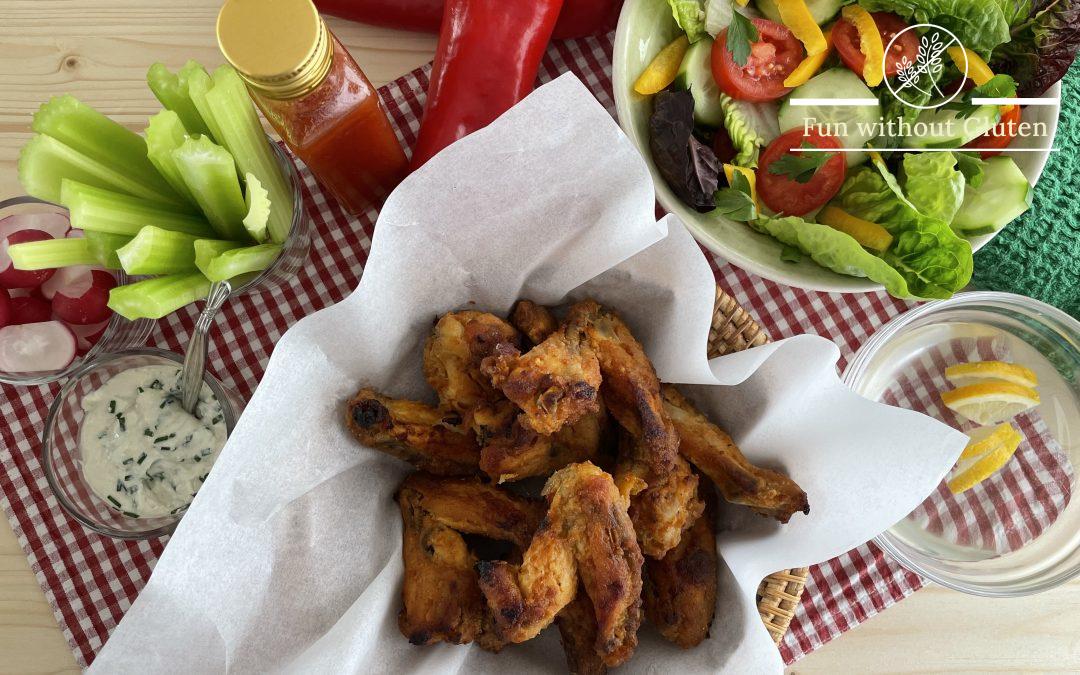 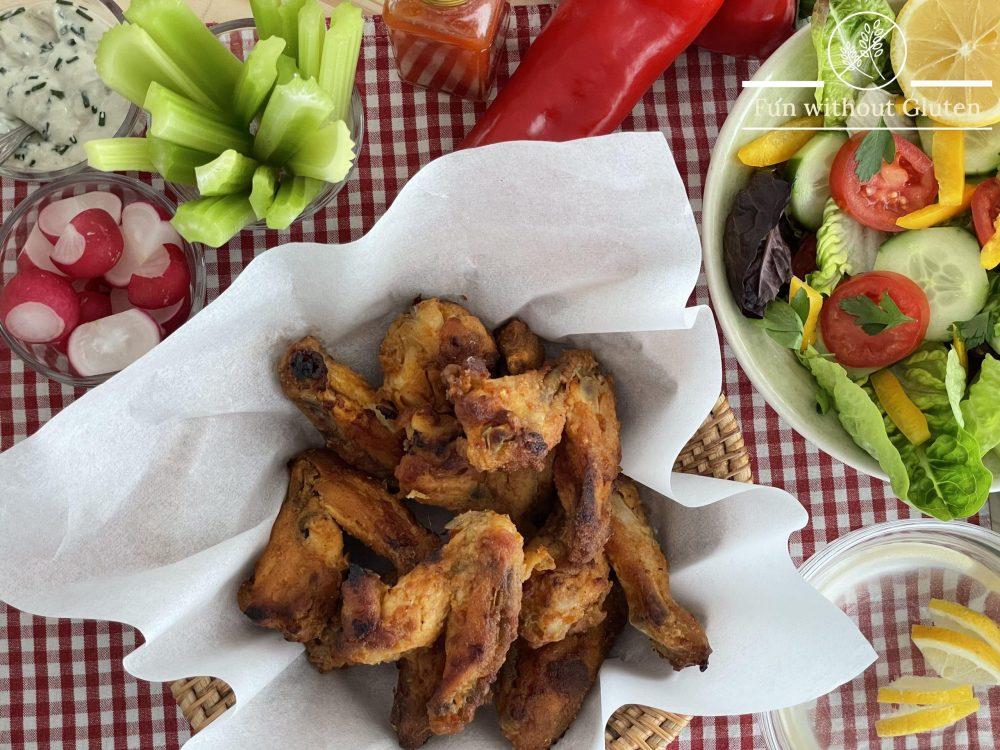 These gluten-free sweet and spicy chicken wings are oven-baked with the skin removed, resulting in a healthier meal rather than the traditional deep-fried version with the skin left on.

The glaze is made with butter and either a store-bought Frank’s RedHot® sauce or Texas-Pete® sauce or my homemade hot sauce version. Reduce the amount of butter if you prefer to lower the fat content slightly.

The blue cheese dipping sauce is made using strong blue cheese, low-fat if possible, and low-fat yoghurt and milk.

In combination with plenty of celery sticks and a generous bowl of salad, this meal is good to go for those looking for some healthier meals to eat.

So, where did Buffalo chicken wings originate from?

In 1964, they were created by Teressa Bellissimo at the Anchor Bar in Buffalo, New York. Her son, Dominic asked her to cook anything she could find for some of his hungry friends that unexpectantly showed up one late night. She came up with this magical combination of fried spicy chicken wings glazed in what she called Buffalo sauce, plus blue cheese sauce and celery sticks to go with it. The addition of celery was probably her healthy touch to ensure some veggies were in the dish! Genius!

If you are intrigued to know more, here is a good write up about how Buffalo wings became famous.

What makes this recipe healthier?

By removing the skin, the chicken wings are immediately lower in saturated fats. When removing the skin, except to spend some time to carefully remove the skin in combination with kitchen scissors and a small knife, plus some occasional tugs with your hands. Alternatively, if your local butcher is willing to remove the skin for you, then this recipe will be quick to prepare.

How do you remove the skin from the chicken wing?

Remove the skin in the following order: 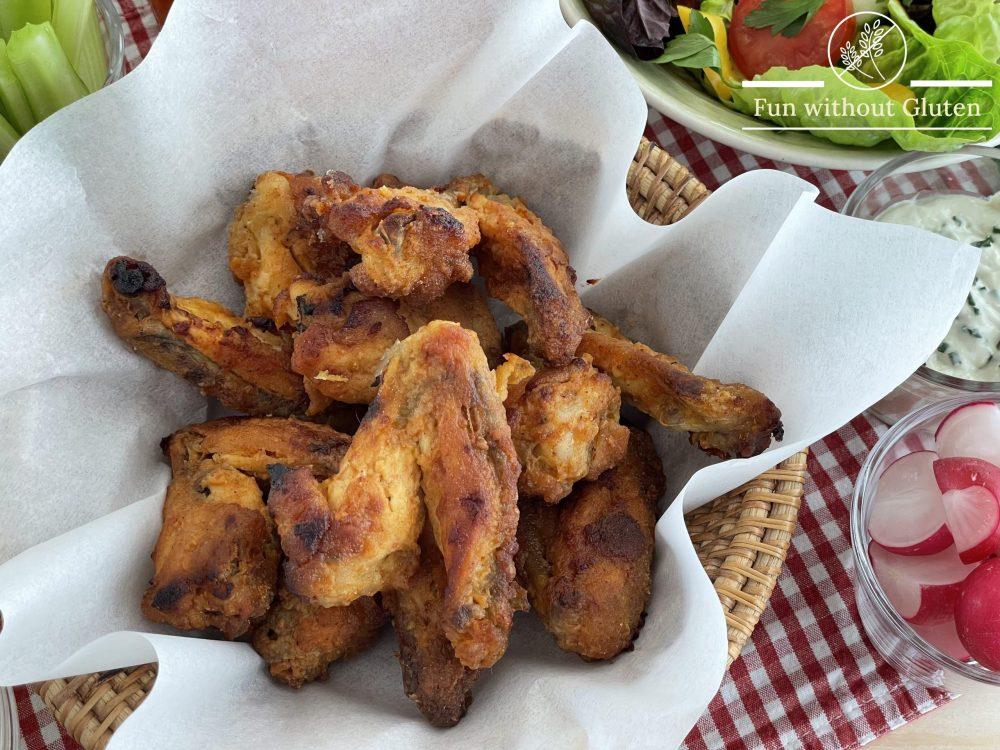 Adding baking powder (NOT baking soda which has a horrible taste) will make your chicken wings crispy when oven-baked. Double-check that your baking powder is gluten-free on the food label before using it.

It helps to use a plastic or paper bag to coat the chicken wings in the seasoned spice mixture. This ensures even coating.

Placing the wings on a wire rack and chilling them for one hour is important to absorb the seasoning and dry out the coating, so they crisp up nicely in the oven.

Either use a large roasting tray or several smaller trays to roast the chicken wings for 40 mins, flipping them over halfway through. If you notice your chicken wings taking on too much colour before 40 mins, remove them to start glazing them in the wing glazing sauce.

Return them to the oven for one final time of 10 mins. Should you like a crispier finish, flash them under a moderate grill for a few minutes on each side.

If you have the time and plenty of chillis and a big bottle of vinegar, making my homemade hot sauce is unbelievably easy and only takes under 30 minutes. Besides tasting pretty close to the real thing, making it homemade will give you double the amount of sauce for half the price of one of the well-known hot sauces. The added bonus of making your own hot sauce is that you can adjust the level of spiciness to your liking. 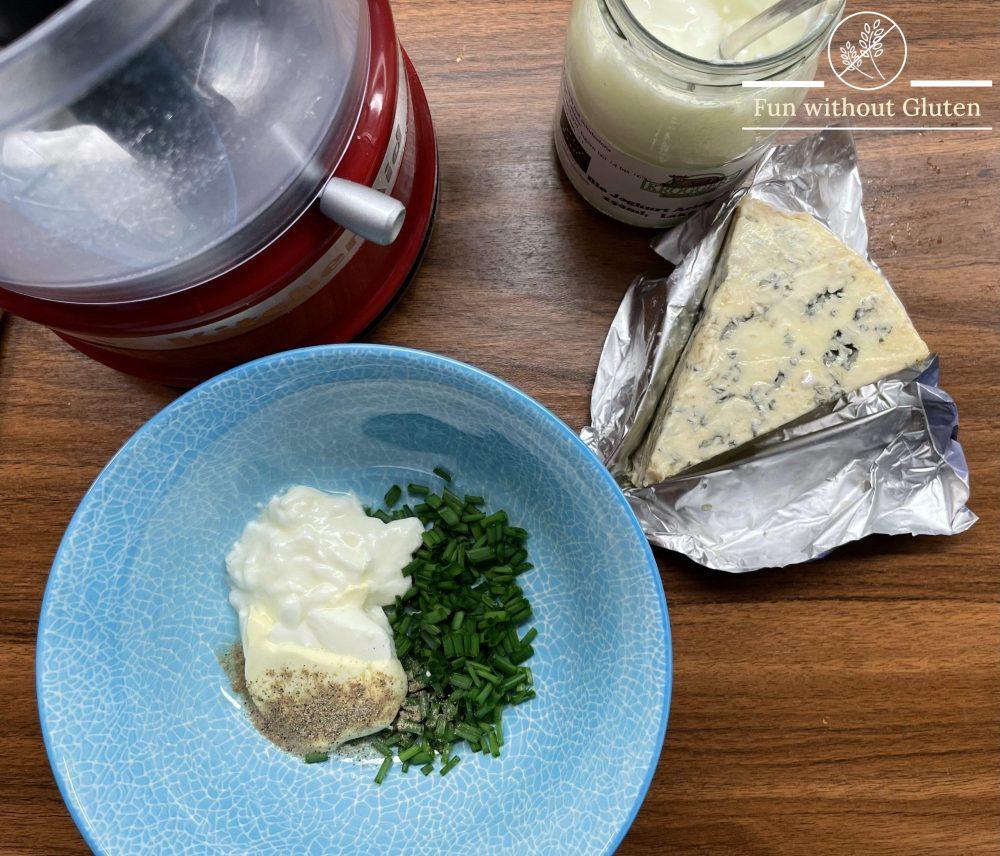 Can I add other chicken cuts?

Wing meat is the sweetest part of the chicken which explains why it is a top choice for Buffalo wings. There isn’t much meat offered, but there seems to be a satisfying feeling, searching for more meat between the bones and ligaments. If you prefer more meat, I would recommend using chicken drummettes which have a meatier upper leg. A great bonus is that the skin is much easier to remove compared to the wing.

Without this classic blue cheese sauce, these Buffalo chicken wings would just not be the same. The combination of spicy and sweet chicken dipped into the creamy, strong and salty blue cheese mixture is heaven for Buffalo chicken wing lovers.
If you aren’t a fan of blue cheese, I would substitute the blue cheese for a milder cheese like goats’ cheese or cream cheese. Combining the other ingredients of low-fat yoghurt and milk plus white pepper and fresh chives creates a delicious dipping sauce, not just for chicken wings. 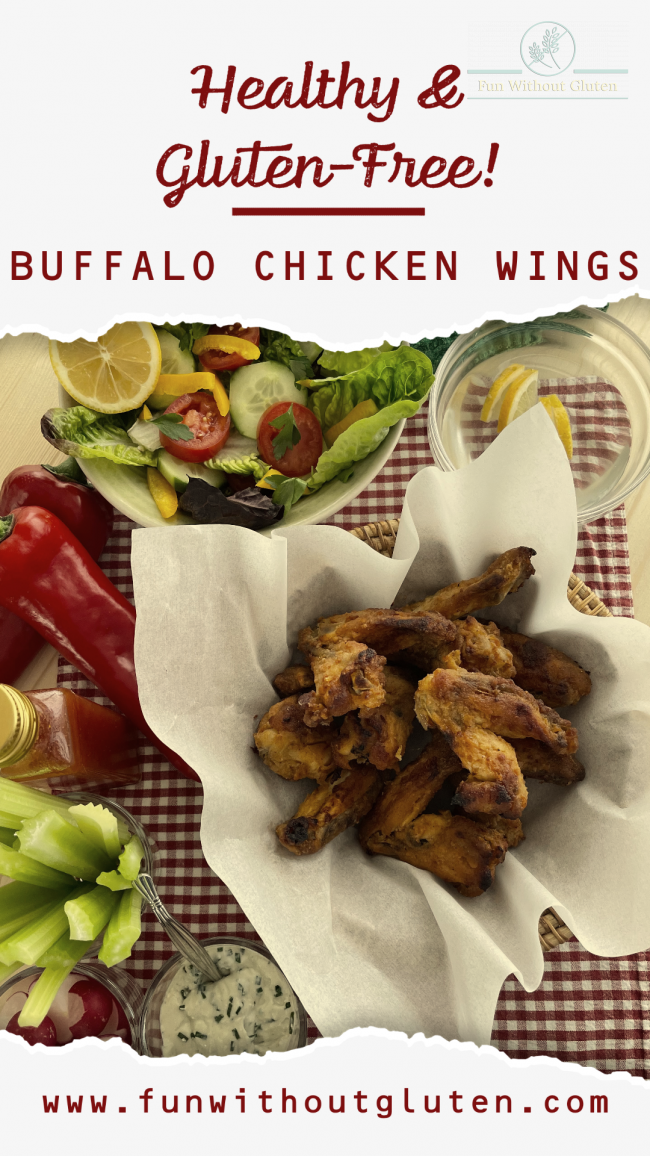 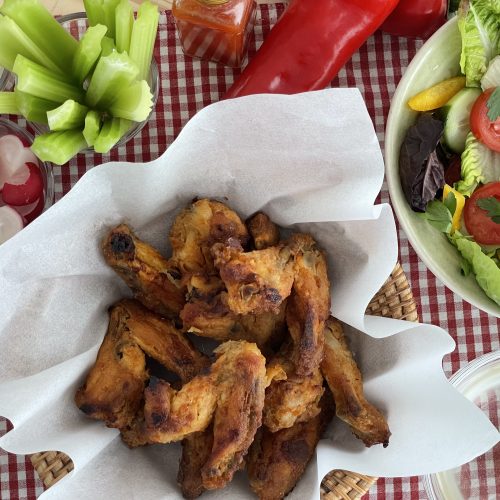 by Sandra - Fun Without Gluten
These sweet and spicy chicken wings are oven-baked with the skin removed, resulting in a healthier meal rather than the traditional deep-fried version with the skin left on. The glaze is made with butter and either a store-bought Franks Red Hot® or Texas-Pete® sauce or my homemade version. Reduce the amount of butter if you prefer to lower the fat content slightly.The blue cheese dipping sauce is made using strong blue cheese, low-fat if possible, and low-fat yoghurt and milk.In combination with plenty of celery sticks and a generous bowl of salad, this meal is good to go for those looking for some healthier meals to eat.
5 from 4 votes
Print Recipe Pin Recipe
Prep Time 30 mins
Cook Time 50 mins
Chilling Time 1 hr
Total Time 2 hrs 20 mins
Course Main Course, Party Food
Cuisine American
Servings 18 wings

Keyword gluten-free chicken, gluten-free healthy meals
Tried this recipe?Let us know how it was!
Please mention @fun_without_gluten or tag #funwithoutgluten! 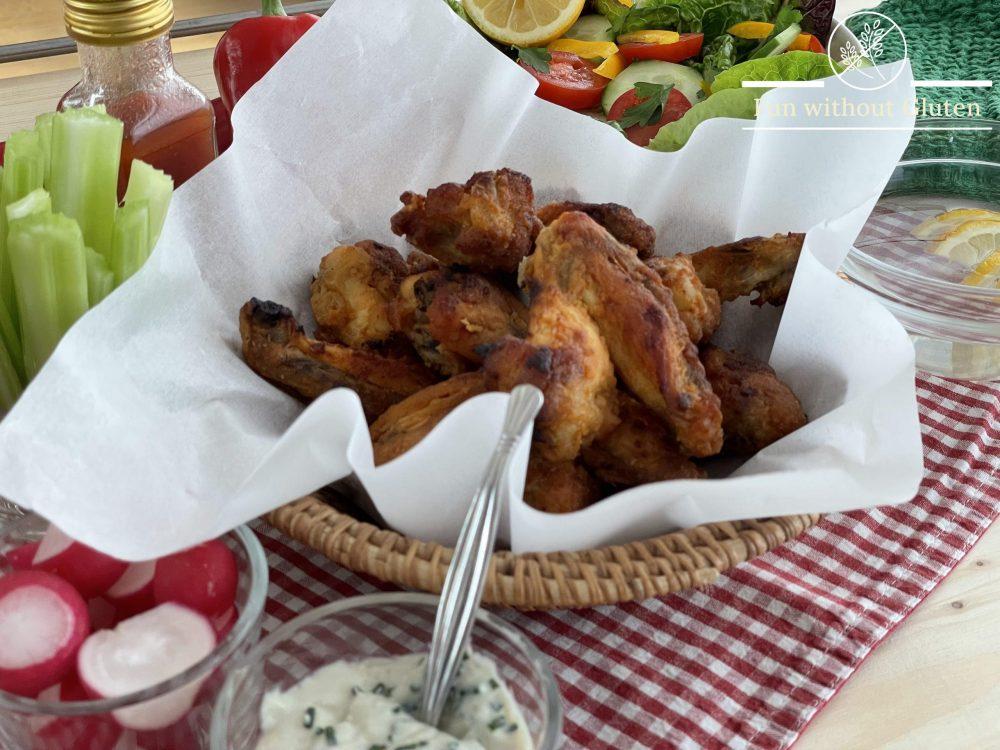 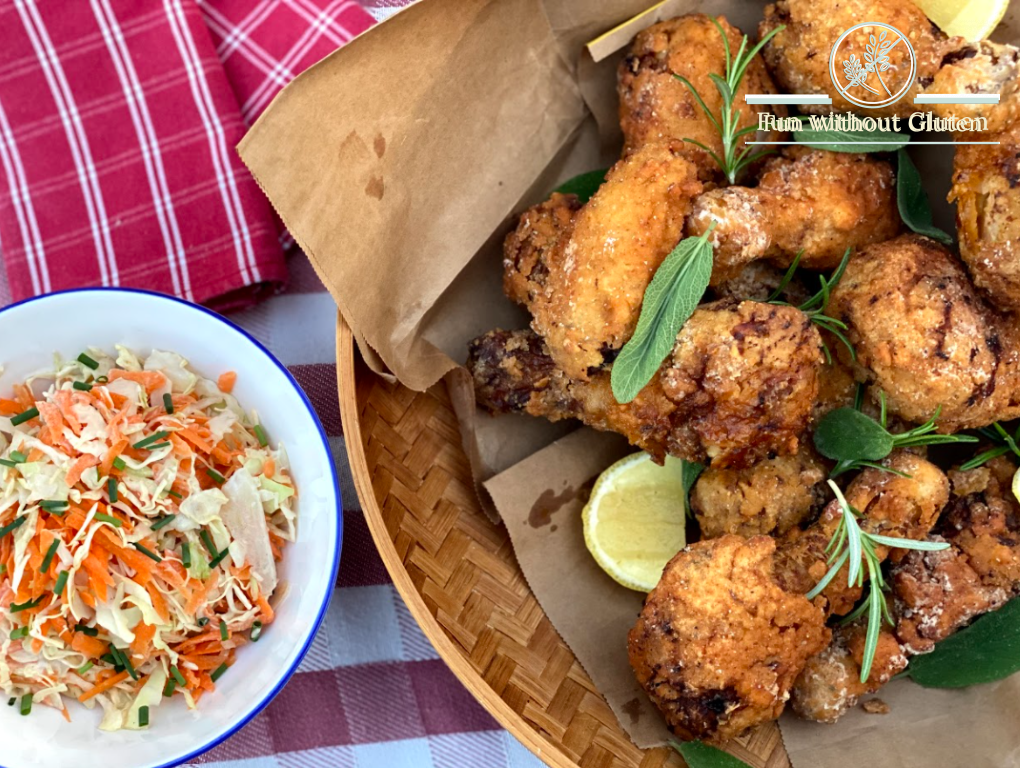 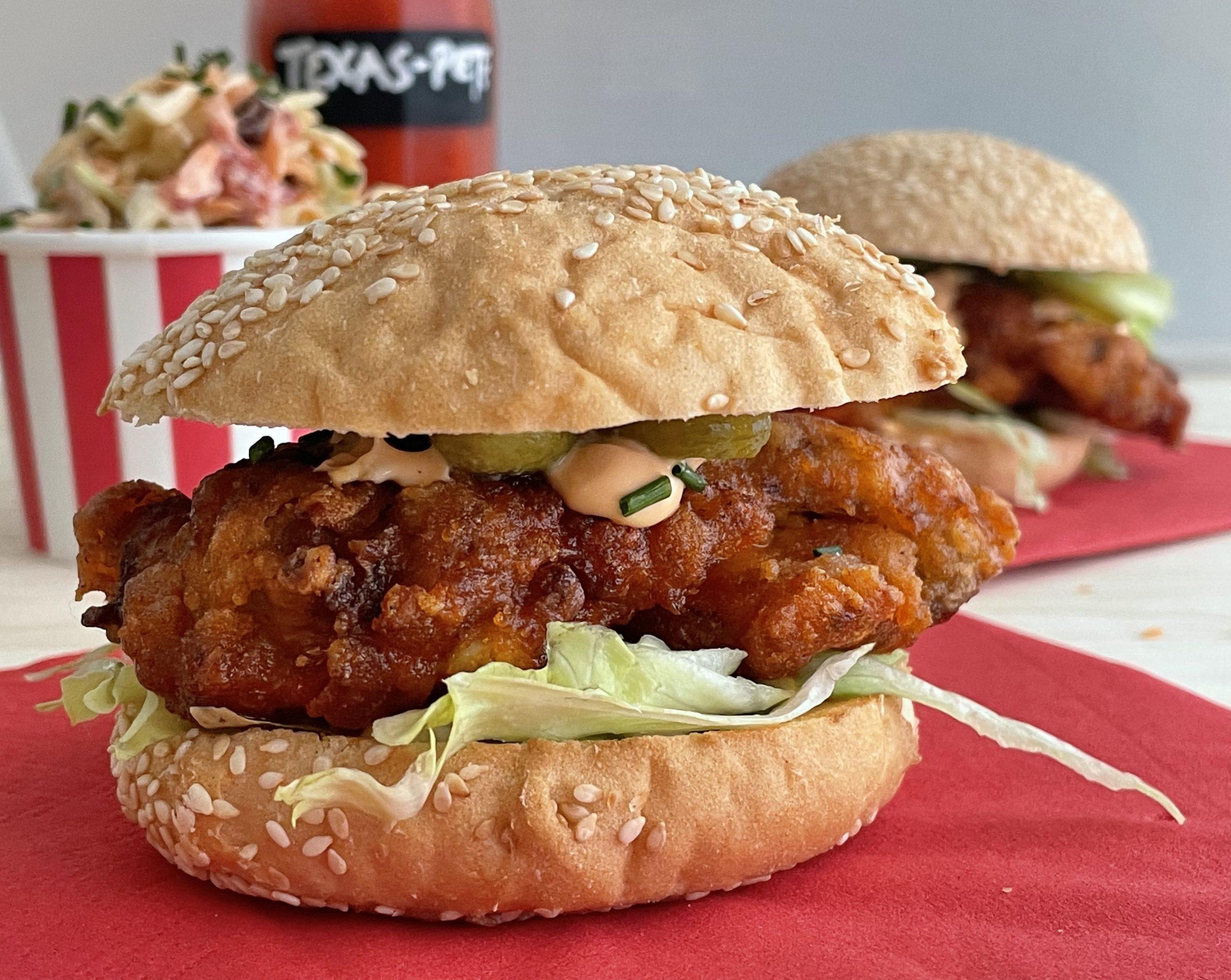 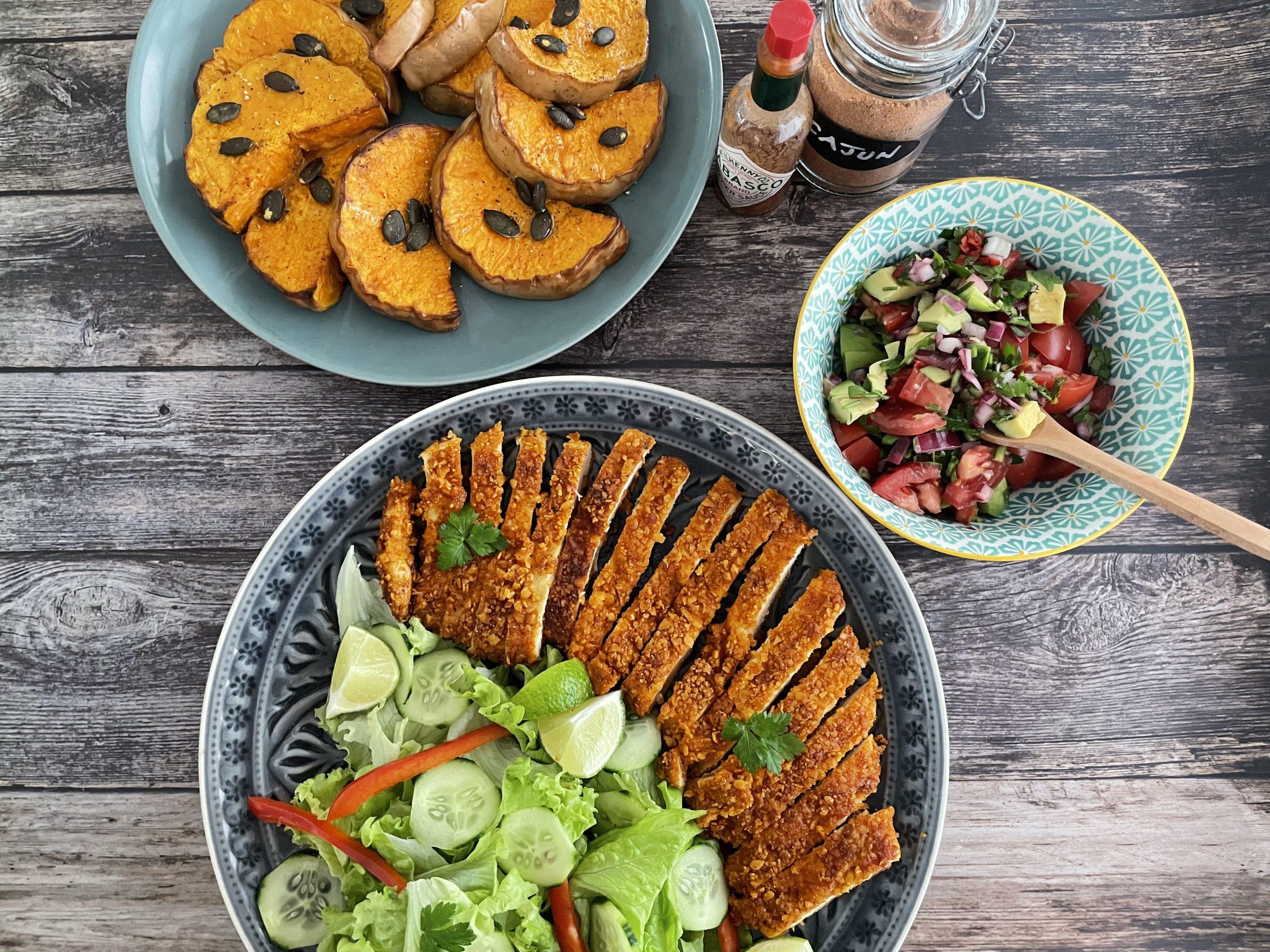