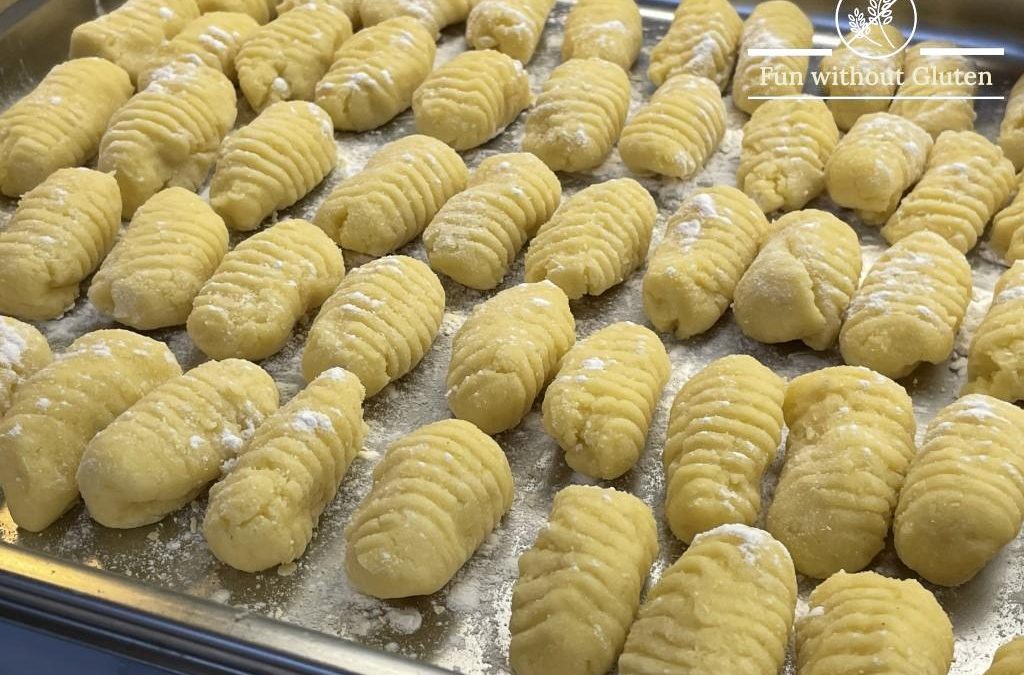 This gluten-free potato gnocchi dish is served with either a sage butter sauce or homemade pesto sauce. The recipes for these sauces are included in the recipe card.

Is gnocchi a pasta?

Potato gnocchi is an Italian dish that falls in the pasta category, although it is made mainly from cooked potatoes that are formed into soft, pillow-like dumplings served with an array of different sauces.

How I learnt to make homemade gnocchi in Argentina

My Argentine grandmother aka Abuela was a real pro at making gnocchi or ñoqui in Spanish. She learnt how to make them from her Italian-Piedmont mother and grandmother who probably learnt from their ancestors. One day, I remember asking her for the recipe. She replied “What recipe? It is all in my head!”

Alternatively, I decided to watch her in action and take notes: Rolling up her sleeves, she would pile the cooked potatoes onto a table and mash them with her bare hands, amazingly while they were piping hot. Then after a light knead, she would incorporate the rest of the ingredients and assemble perfectly uniform gnocchi at full speed. Eventually, the table was taken over by at least two hundred gnocchi and left there until the accompanying meat tomato sauce was ready. In my eyes, it was mesmerising to watch!

Having a gnocchi cook in an Argentine home is very handy as every 29th of the month, they celebrate gnocchi day – Día de los ñoquis.

Besides the mandatory gnocchi-eating with family or friends, there is an additional custom to slip some money (usually notes) under each plate. The superstition goes that carrying that money with you after the meal is said to bring you enormous luck and prosperity. Although many donate the money to a charity of their choice, hoping it will bring them some good karma in return.

Another custom is to donate the money to the cook for next month’s gnocchi meal – a great way to keep those gnocchi circulating! The reason Argentines religiously eat gnocchi on this date falls back to when paychecks were handed at the end of each month, so all that was supposedly left in the kitchen pantry on the eve of payday were humble and filling potatoes!

Which potatoes are the best for gnocchi?

Any floury variety, but specifically here are some highly suitable potato varieties:

Should I bake or boil the potatoes?

It is entirely up to you, which method you choose, as both work well, although I prefer boiling as it is faster and more traditional in keeping with my grandmother’s recipe.

1. Buy only floury potatoes – the older, the better. Tip: buy in advance and store them for several weeks to convert them into older potatoes.

2. If available, use organic eggs.

3. Cook the whole potatoes in their skins.

4. If available, use a potato ricer when the potatoes are still warm. The potatoes will be airer and fluffier. 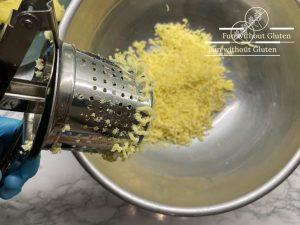 5. Don’t skip the sweet rice flour * – it is an important gluten-free ingredient that adds a nice bite to the gnocchi without it being sandy or dry. This flour is also known as glutinous rice flour, which can be readily found in most Asian supermarkets or on Amazon.

6. Add the flours gradually, not all at once.

7. Work the dough by hand rather than using a mixer.

8. Do not overmix the dough.

9. Choose between the gnocchi press (ñoquera) or the back of a fork to form your gnocchi. The press gives some bonus “extra stripes” compared to the fork, but both will work well towards a traditional gnocchi shape. 11. Don’t overcook the gnocchi. Remove them as soon as they pop up to the surface of the cooking water.

12. Preferably, eat them straight away with your chosen sauce, otherwise heating them up later is fine, but bear in mind that this may result in softer gnocchi due to the extra heating time.

Now that you know what potatoes to use and what to do…using only a few ingredients, you can rustle up some impressive gluten-free gnocchi for your family or friends by following this recipe. I like serving my gnocchi with a simple sauce such as sage butter as you can really taste the gnocchi without being plastered with highly seasoned meat sauces. They are supposed to be delicate and light – so keeping with that idea, this sage butter does the trick as well as a homemade pesto sauce. 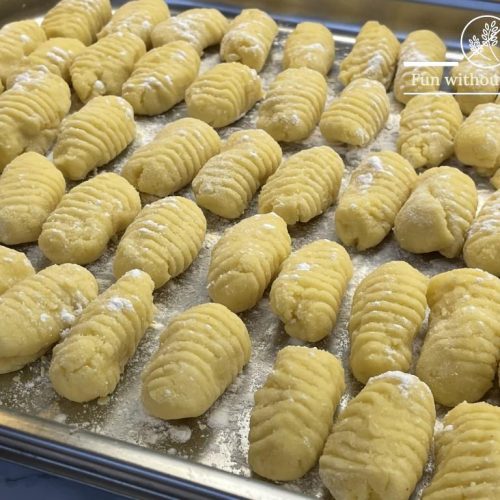 by Sandra - Fun Without Gluten
Gnocchi is an Italian dish that falls in the pasta category, although it is made mainly from cooked potatoes that are formed into soft, pillow-like dumplings served with an array of different sauces.These gluten-free potato gnocchi are served with either a sage butter sauce or homemade pesto sauce. The recipes for these sauces are included in the recipe card.
5 from 1 vote
Print Recipe Pin Recipe
Prep Time 1 hr
Cook Time 40 mins
Potato Resting Time 20 mins
Total Time 2 hrs
Course Kids' Meals, Main Course, Vegetarian
Cuisine Argentina, Italian
Servings 6 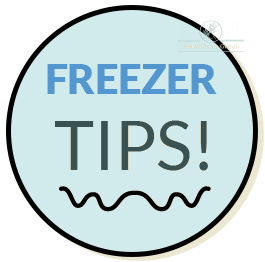 Fresh, uncooked gnocchi can be frozen on a tray and later transferred to a zip-lock bag or freezer container. No need to thaw, as they cook perfectly straight from the freezer into boiling water.