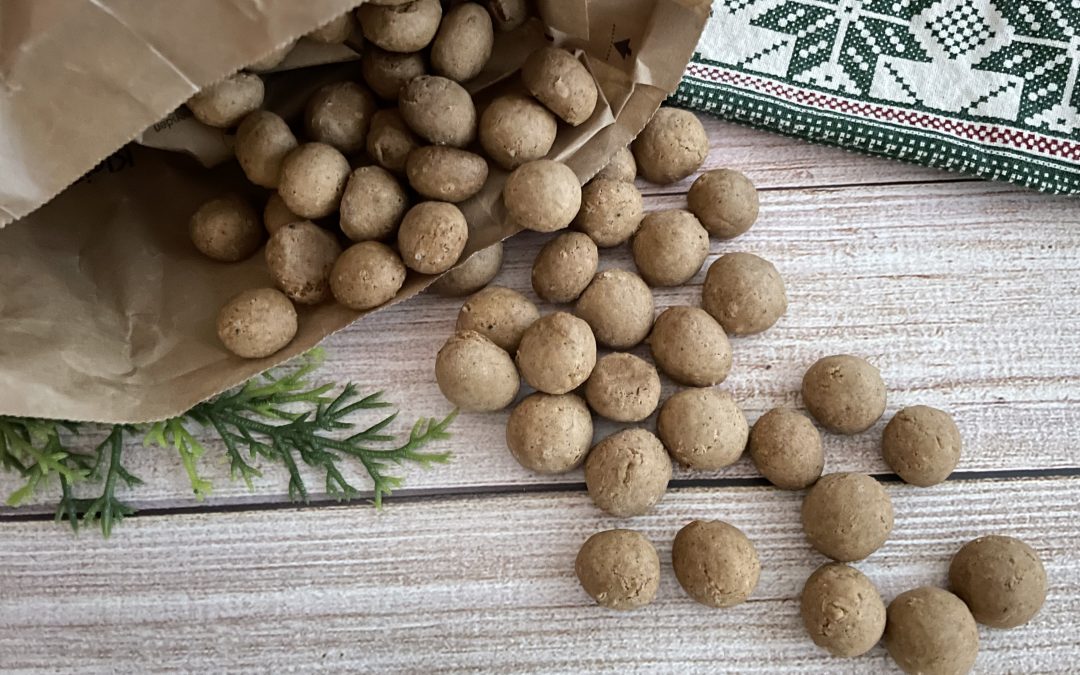 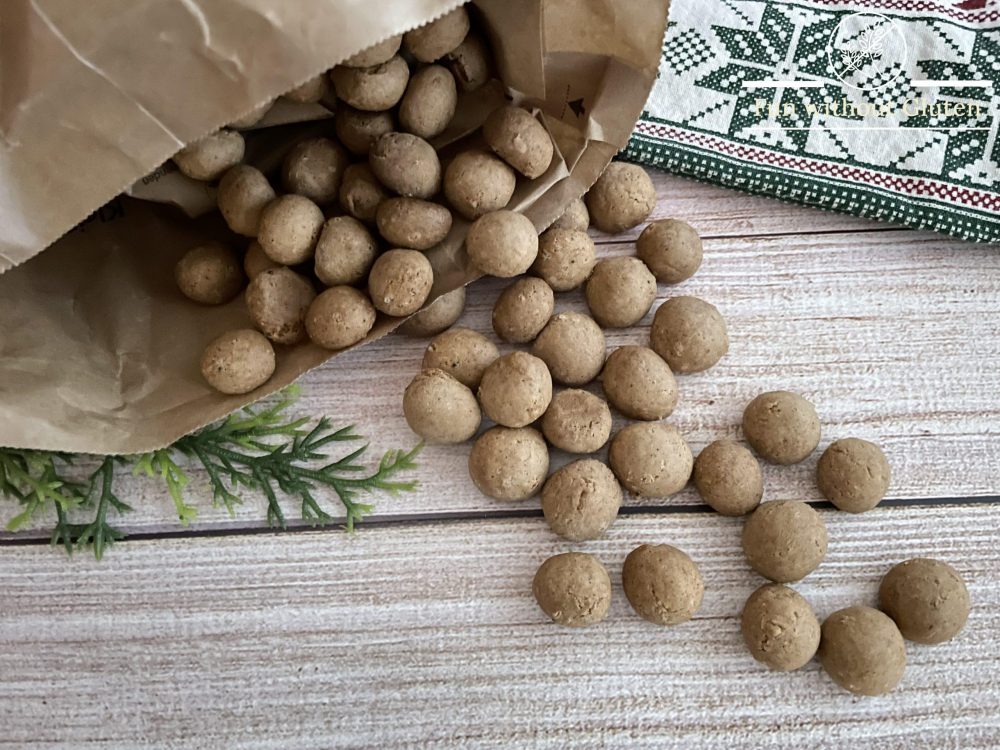 The Dutch make these spiced cookies which are a big part of the Sinterklaas (St Nicholas) celebratory traditions during the lead-up and on the big day which falls every fifth of December. So, what happens if your child or children are gluten-free? This gluten-free pepernoten recipe will make at least 50 small cookies to let them join in the fun and enjoy their own gluten-free supply.

Pepernoten, (Pepper nuts) are small aromatic, spiced cookies of Dutch origin, using a similar spice blend as for another Dutch cookie, Speculaas, but with more spice content and harder, so to withstand the throwing and scattering of them. They are typically tough and chewy, or as the Dutch would say Taaitaai, literally meaning “chewy, chewy” and are no bigger than a nut.

Why are pepernoten so important in the Netherlands?

The festive season starts early in the Netherlands, from mid-November. Sinterklaas arrives on his white horse after a long journey by steamer from Spain and continues to parade throughout towns up till the fifth of December, Sinterklaas night. This day is celebrated with plenty of festive food, including pepernoten, speculaas, waffles and/or kruidnoten, another similar pepper nut cookie.

Traditionally, pepernoten are thrown at the children while watching the processions. His entertaining sooty-faced helper, Piet, carries sacks full of pepernoten and playfully throws them around. This most likely was a symbol of Sinterklaas’ generosity. The children practice their catching skills, bring home their supply and anticipate a gift later that night from Sinterklaas, leaving a carrot for his horse in their favourite shoe.

A home visit by Sinterklaas:

If you’re lucky, Sinterklaas and his team of helpers may visit your home and bring pepernoten, chocolate coins and sweets for the children. A nice tradition is the reading of poems amongst family members, Sinterklaas and Piet.

My Dutch friend, Guido, kindly shared some poignant moments of this exact experience for his granddaughter and family, which were captured with these lovely photos. 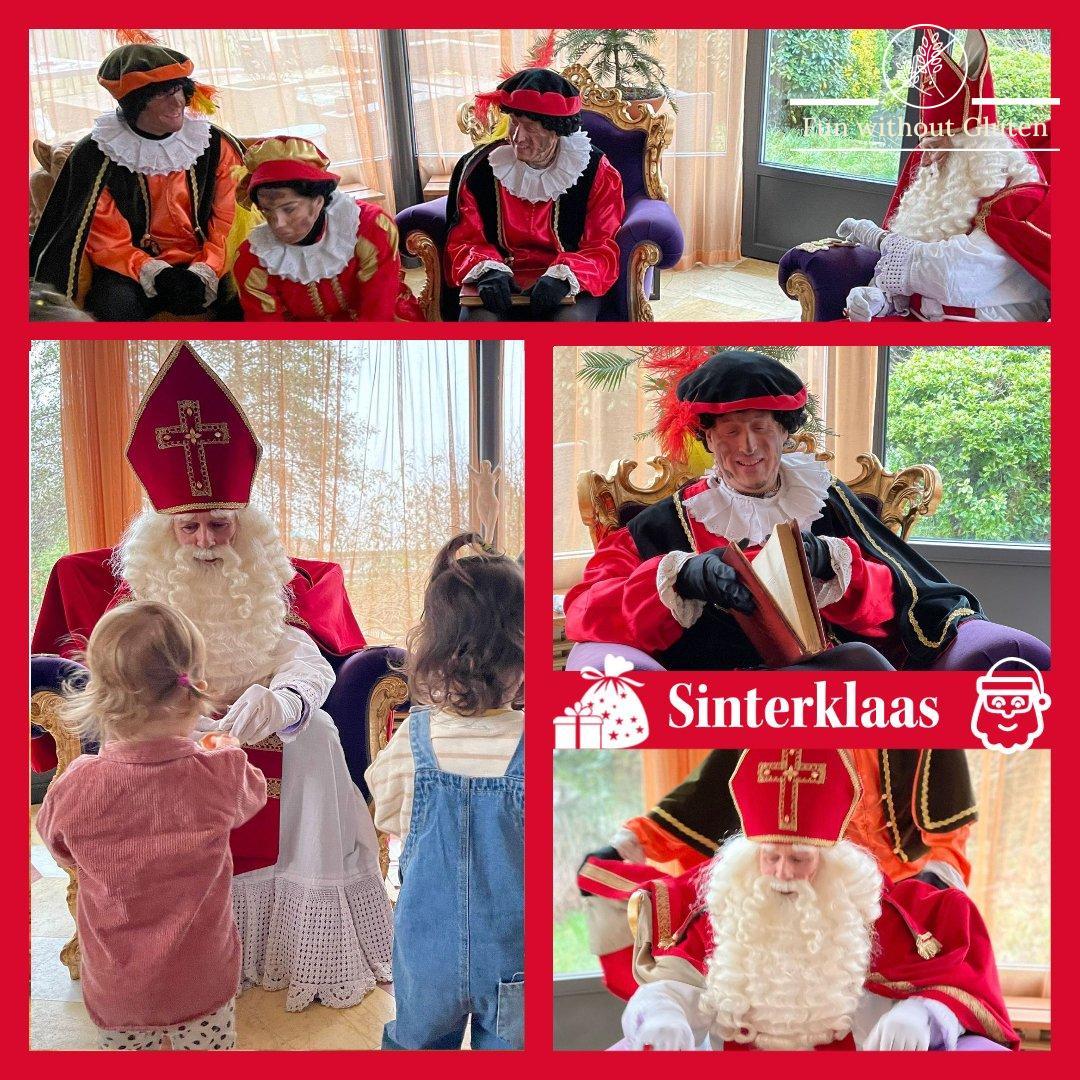 Where can I find the pepernoten spice blend?

In the Netherlands, store-made pepernoten blends are known as Speculaaskruiden. Double-check for gluten ingredients before buying.

Or you can make your own with my recipe HERE!

What is in the pepernoten spice blend?

Making your own is easy with spices that you probably already have, in fact, the spice blend is quite similar to pumpkin pie spice. You will need the following spices:

The exact measurements are listed in the recipe section. You can also make a jar (measurements included) if you plan to make plenty of pepernoten this festive season!

How do you serve pepernoten?

Besides enjoying pepernoten during Sinterklaas, these hardy cookies last nearly forever in a sealed jar or cookie barrel and are perfect to snack on or serve to visitors throughout the Christmas season. They may not look so attractive like their sister cookies, Speculaas or Gingerbread, but they pack a punch in a small portion. Perfect to accompany a coffee or hot Christmas punsch!

What shape should I use?

From a practical point, I prefer the square shape as it is less time-consuming. If you are happy with squares, cutting them out will take you half the time compared to shaping 50 to 60 balls no bigger than 1 cm in diameter.

If you prefer the round shape and want to involve your children in this recipe, give them a fun activity, like shaping the pepernoten balls…this will solve the workload for you! 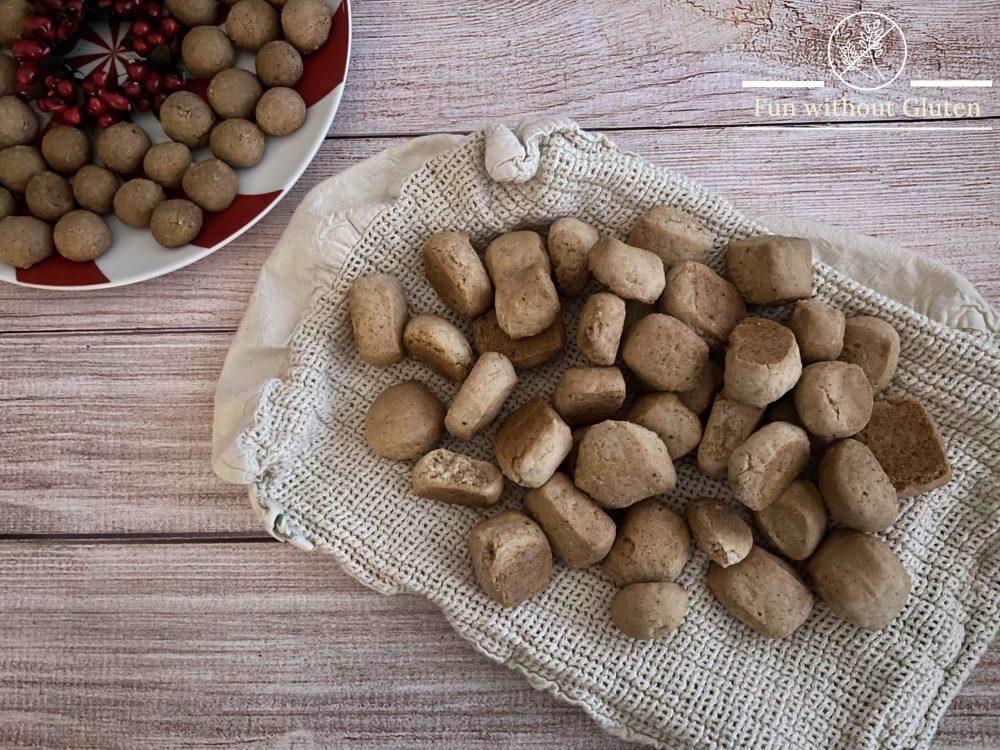 Can I make these in advance?

Yes! In the freezer for up to 3 months.

The great thing about this pepernoten recipe is that the raw dough freezes so well, in fact, freezing or chilling it, improves its flavour. A second positive note is that they can be baked straight from the freezer, but make sure you have already shaped them before freezing so it is a simple step of transferring them directly from the freezer to the baking tray.

Alternatively, cover the dough pieces and store them in the fridge for up to one week.

Besides plain pepernoten, over time, more variations have evolved such as chocolate pepernoten, which are coated in either milk or dark chocolate. Some are stuffed with dried fruits or nuts.

Are pepernoten the same as the German pfeffernüsse?

In Austria and Germany, pfeffernüsse also means pepper nut and has a similar texture and flavour. However, they are finished off with a decadent coating of white icing or dusted icing sugar. Chocolate coated pfeffernüsse are also very popular.

Do you want more information about Dutch food and lifestyle?

I adapted this pepernoten recipe into a gluten-free version from a cookbook called “Stuff Dutch People Eat” written by Collen Geske, a Canadian ex-pat in Holland who has embraced Dutch food and lifestyle to a fine art. Her website shares many tidbits about Dutch living plus a list of her many cookbooks which are perfectly symbolic of the traditional street and home Dutch cooking. For those interested in her website, the link is https://stuffdutchpeoplelike.com/about/

Please note that my pepernoten spice blend was custom made, tested after many attempts and approved by my Dutch husband. 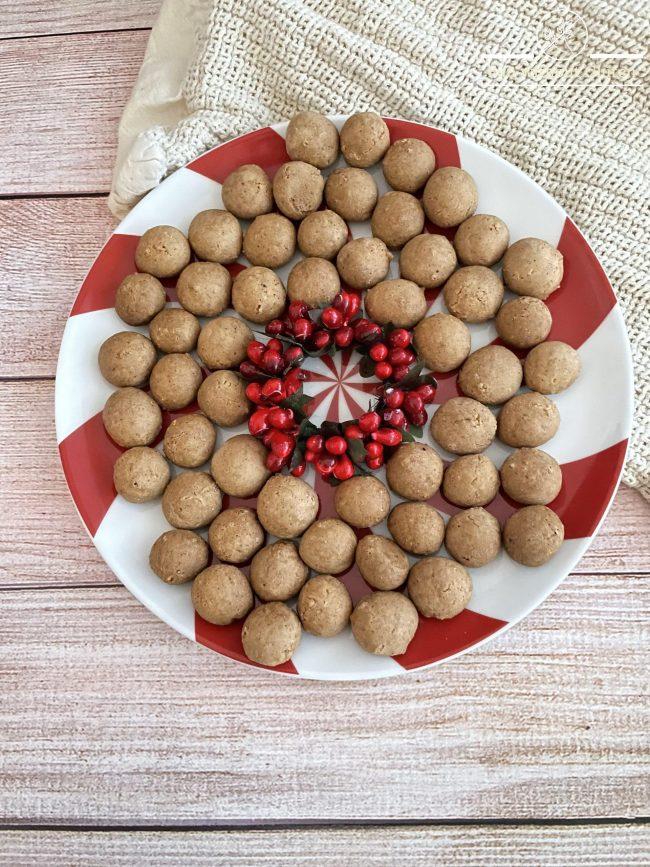 For the gluten-free pepernoten:

* If your store-bought gluten-free self-raising flour already has xanthan gum in the blend, reduce the xanthan gum measurement in the above recipe to 1/2 teaspoon only.

For the homemade pepernoten spice blend:

Makes 4 teaspoons for this recipe: 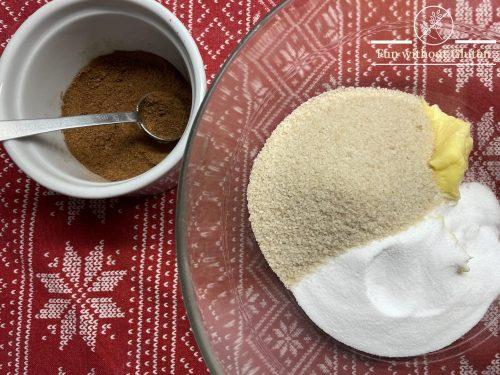 1. Cream the butter and sugars together until the mixture looks creamy. 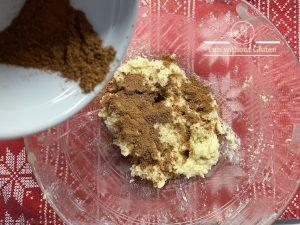 2. Whisk the egg whites lightly and add this to the butter mixture, together with the pepernoten spice blend. Mix well. 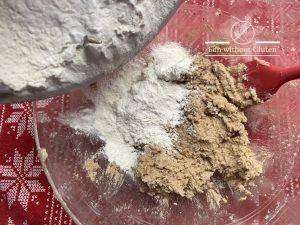 3. Whisk the self-raising flour together with the xanthan gum and baking powder. Add this to the butter mixture. Mix well.

4. Add the milk and knead using a pastry blender or your hands. Add one to two tablespoons of water to bring the dough together. You may not need to use all the water. The dough is ready if it feels soft but does not stick to your fingers. If it does end up being too sticky, add some more flour and knead again until it reaches the right consistency. 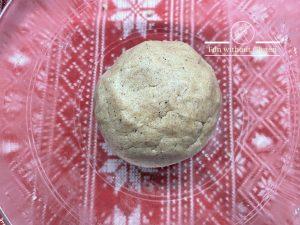 5. Knead well inside the bowl for several minutes. Cover with plastic film and rest in the fridge for a minimum of 2 hours. This is the ideal time for the flavours to develop more.

6. Bring the dough out and allow it to come to room temperature for around 30 minutes. 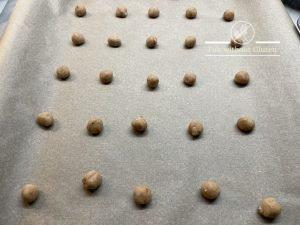 8. Line two baking trays with baking paper or silicone mats and start rolling out the dough into tiny balls weighing 2g (1cm in diameter) each. They will look like tiny balls but will expand once baked. 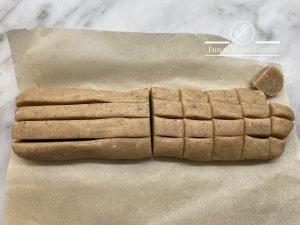 9. If you prefer to make the traditional Kruidnoten shape, roll the dough into a log shape and using a sharp knife or dough scraper, slice the log into even 1cm nugget pieces.

11. Allow to cool down on the baking trays for 5 minutes, then transfer them to a wire rack to cool down completely before storing them in a tin or sealed container. 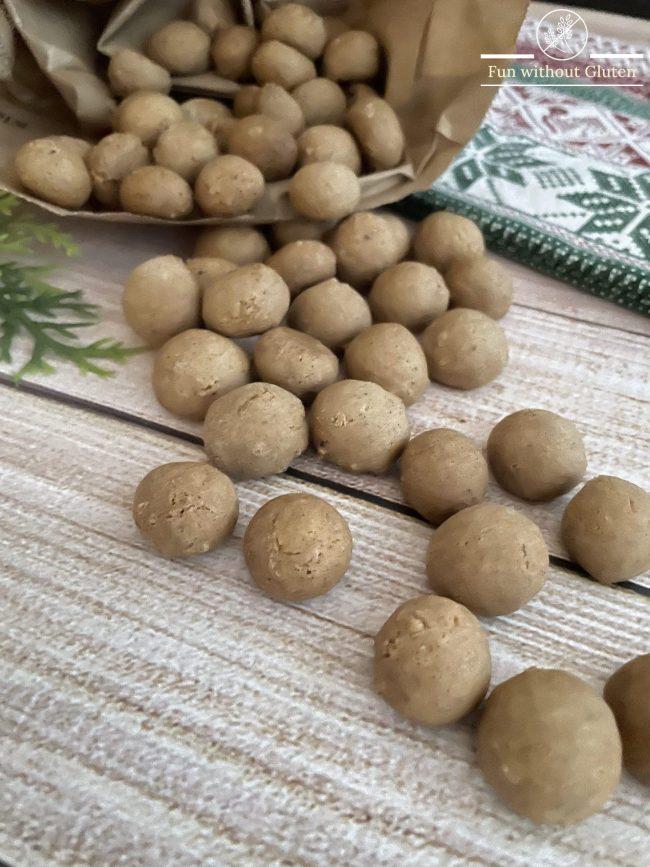 Baking longer than 10 minutes or in an oven hotter than 175°C/345°F, will result in rock hard pepernoten or kruidnoten. Keep an eye on the baking. If you aren’t sure how your oven behaves, test-run a few pepernoten pieces before baking the whole batch.