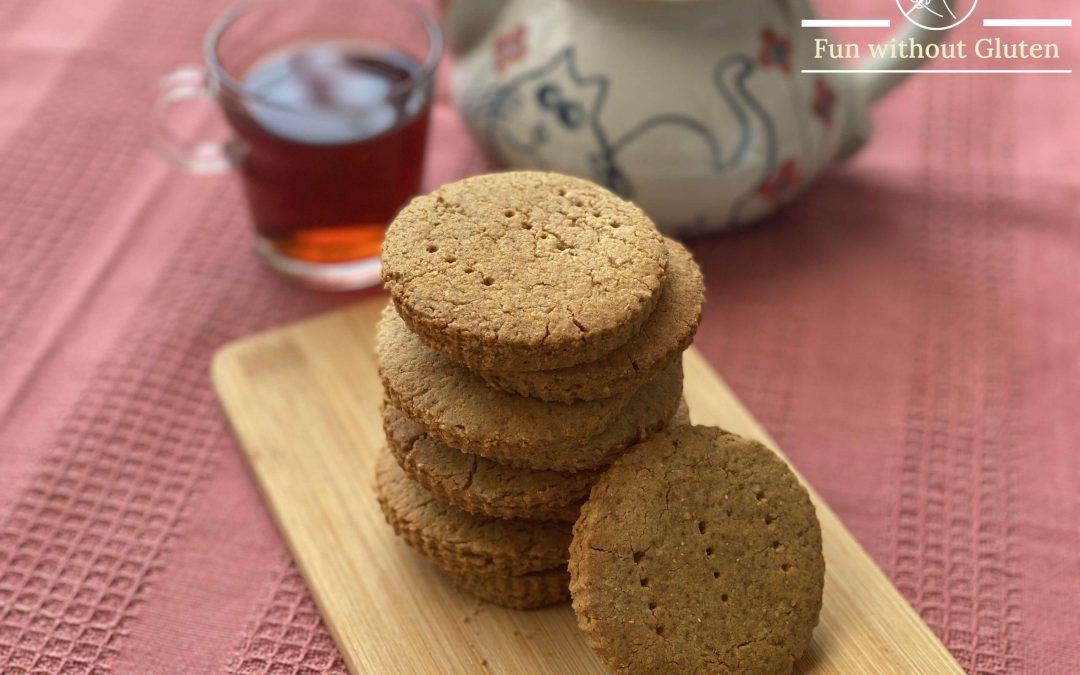 Pre-gluten-free days, I always had a packet of McVitie’s digestive biscuits handy for those peckish moments, or even when I felt under the weather. In the UK, they sell gluten-free digestive biscuits in most supermarkets. In mainland Europe, they are hard to come by, and when I do find them, they are expensive and not quite the same as I remember.

I decided to experiment with different flours and flavourings to try to mimic that “digestive” taste. The most important ingredient is the bicarbonate of soda/baking soda. After researching its origin, I discovered that two 19th century Scottish doctors invented the biscuits as a cure to digestive aliments. The magic ingredient, bicarbonate of soda has many health benefits. Traditionally, one teaspoon with a glass of water a day would keep everything in ship shape. I think I much prefer one biscuit a day over the water!

1. Mix all the flours, sugar and salt together in a large bowl.

2. Rub the chilled butter into the flour mixture either using your fingertips or processing it in a food processor until the mixture looks like breadcrumbs.

3. Mix 3 tablespoons of boiling water with the golden syrup or honey and the bicarbonate of soda/baking soda. This will foam slightly and turn into a nice, golden colour.

4. Add this golden mixture to the flour mixture, together with the cinnamon powder, milk and vanilla extract. Mix well until the dough sticks together.

5. Remove from the processor or bowl and shape into a round disc.
6. Cover and chill for 30 minutes.
7. Pre-heat the oven to 170 C/ 325F.
8. Roll the disc out on a lightly floured surface until the dough measures 3mm in height.
9. Using round cutters measuring 7cm wide, cut out approximately 24 biscuits and place on lined baking trays about 3cm apart.
10. Using a fork, mark the biscuits as shown in the photo.

How to eat them: If you have some spare dark chocolate in the pantry, simply melt some in a bowl over simmering water or in the microwave and spread them over the top of the biscuit. Allow to cool in the fridge before serving. You will be rewarded with a very authentic “chocolate digestive biscuit”. An impossible find in the supermarket for those gluten-free treat moments! Now that you know how to make these easy biscuits, why not turn them into homemade digestive biscuit crumbs * for all your pie crusts, cheesecake bases, sweetmeats, etc. Double the recipe and save some whole and the others for crumbs. Simply process the biscuits into fine crumbs and store them in airtight containers in the freezer for later use or use them straight away for your dessert in mind. If using the 7cm cutter and each biscuit is 3mm thick, they should weigh 20g each.